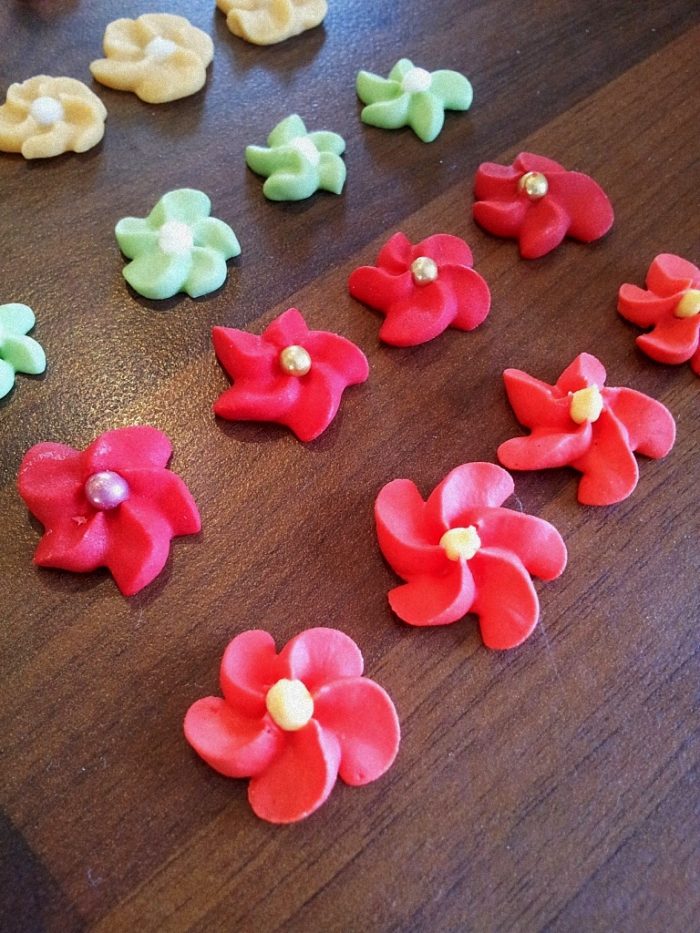 I use royal icing A LOT!  And every time I write a post about something involving royal icing, I write the recipe out again.  So I thought I should probably give this recipe its very own post and just go crazy with the links.

There are two versions for making Royal Icing.  One is whipped, the other one isn’t.  I will include both because I use both.

Put the egg white into a bowl.  Add half the icing sugar and mix vigorously.  Add the rest of the icing sugar one tablespoon full at a time, mixing after each addition.  The icing will be the right consistency when it swallows a ribbon of itself in 3 seconds.  That sounds odd.  Let me explain:  When you lift the spoon out of the icing and move it around over the bowl, it will form ribbons on the surface of the icing.  If these disappear within 3 seconds, you’re good to go.

For piping you need a slightly thicker royal icing.  You could use the recipe above, but I prefer whipped royal icing for piping or making flowers.

If you want to colour the royal icing, spoon it into separate little containers and mix in the food colouring.

You could also use this recipe for flooding/dipping.  Just add some water – a teeny amount at a time – until the icing swallows a ribbon of itself in 3 seconds as above.   If you have added too much water, stir in some more icing sugar.  This is a hassle, though, so add your water sparingly.

Personally I just lay some cling wrap right on the surface of the icing, making sure to push out any air bubbles.  (Air is public enemy number one when it comes to royal icing!)

I also wrap a damp paper towel around the nozzle of the concertina bottle I’m using to pipe with when I’m not actually using it.