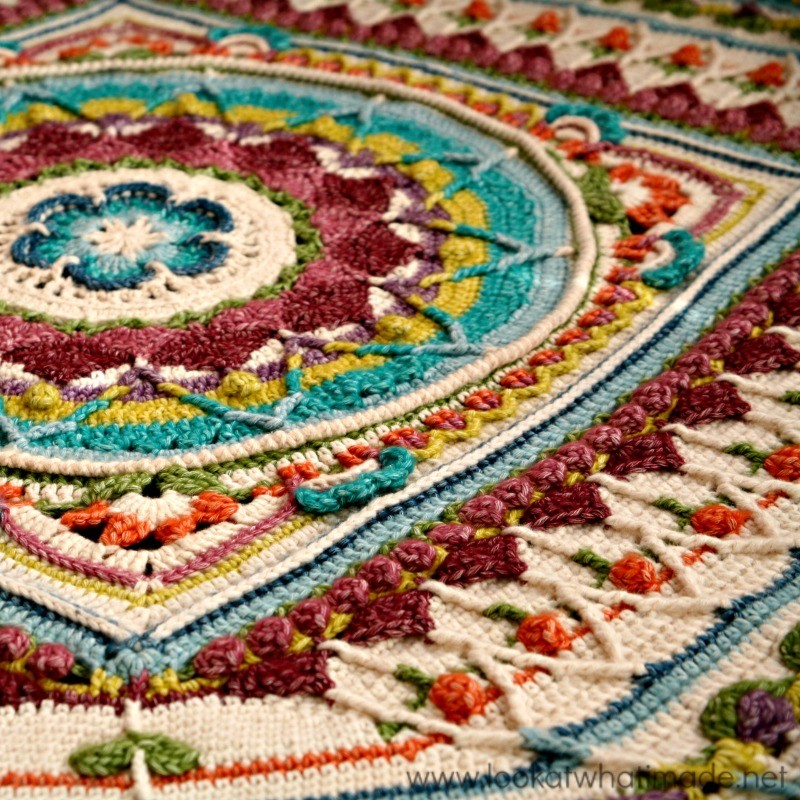 At the end of Part 10 of the Sophie’s Universe CAL 2015 , which we will be doing this weekend, we will be halfway through the CAL.

For the small and medium blankets the estimated yardage is sufficient to allow for variance in gauge/tension, but for the large version I have specified just enough yarn to cover people who work as tightly as I do.  I have had a few questions from people using the Stonewashed XL colourway, stating that they have run out of one colour or another (particularly Amazonite and Lemon Quartz).  This indicates a significant difference in personal tension.

I realize that people’s tensions differ, and as stated at the very start of the CAL, the yardages were estimates as I hadn’t completed all 3 versions (and still haven’t).  So to help you figure out if you need to buy more yarn, I have put together a list of the grams and meters used per round (up to the end of Part 10).

If you realize that you have used more yarn than me, you will need to either buy more yarn, or stop the CAL a few rounds sooner.

Please keep in mind that you still need to make Part 10 (which is included in the Used to the End of Part 10 (meters) below).

I will be making similar tables for the other sizes at a later date.

See Part 10 above to see how much yarn (and which colours) you will be using in Part 10 on Sunday.  The table below has already taken these values into account.  The only colours you should be keeping an eye on at this point are the Amazonite and the Lemon Quartz (see the note below the next table).

*Part 10 is the last time that Amazonite will be used.  If you have 20 grams (or more) of Amazonite left at the end of Part 9, you’ll be fine for Part 10 and you won’t need to buy any more yarn.

Lemon Quartz will be used for the last time in Part 12 and you should have at least 26 g left at the end of Part 9.

The best way to check your usage is to weigh what you have left of each colour.  It should be quite similar to what I have left (minus the yarn still to be used in Part 10).  Yes, you have to do a bit of maths, but I wanted to get this information out to you as soon as I could, so you could make a timely and informed decision.

If you have run out of Amazonite, but don’t want to buy any more yarn, use Moonstone for the Amazonite round (Round 77) instead.

I hope you find these tables useful.